Episode 38 : Behind The Scenes With Doni Gross

Episode 38 : Behind The Scenes With Doni Gross

After taking a break for Passover, we start back up with episode 38.

Episode 38 opens with Zeesha sitting down with Doni Gross.

Doni is a well know producer in the Jewish music world. He has produced and composed and contributed to many well known albums.

As we enter into Sefira  it becomes the time for A Capella music. Doni Sits down with us to talk music, Torah and the magic of A Capella.

A Kumzitz In The Rain

It began as a work by friends who loved singing and the purity of the Kumzitz.

As the music and camaraderie developed, the series took on a life of its own; as a cult classic. People began to realize the potential and power of real capella music and the demand created album after album of classics.

A Kumzitz In The Rain is not a group, it is not a brand and it is not a “filler” for instruments during times without music. 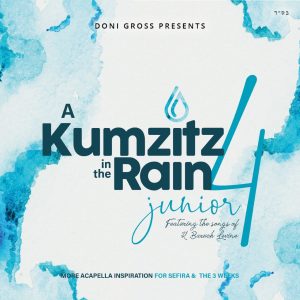 It fulfills, it connects, and it reflects feelings that are very hard to get in touch within today’s day and age.

“A Kumzitz in the Rain Volume 4 – Junior” features the timeless classics of Baruch Levine.

Masterfully produced and arranged by Doni Gross, this album features 13 songs, and over an hour of soulful acapella music sung by the sweet voices of children that will surely tug at your heart.

You will find yourself singing along and remembering specific moments and memories in your life. The album will be available wherever Jewish Music is sold.

The Album can be purchased here https://akumzitzintherain.com/

As we delve deeper into the album, Doni expresses his passion of helping and supporting Jewish artists.

“Most people come to you and just expect the new albums to be available on Spotify and you say, your doing your part to support by paying for Spotify”

” Most artists don’t make that much money from the albums., and when people and the culture has become a streaming culture it only harms the parnassa!”

We have had this discussion many times on the show, and it’s very important to go and support the artists!

Founded over 25 years ago and based in Brooklyn New York KSCVK helps widows, orphans, and people who are in dire need of marrying off a child.

Working with their network of vendors, KSCVK ensures that every wedding is special.

Run by world-renowned party planner Devorah Benjamin, KSCVK takes care that each wedding is as elegant as the next ensuring dignity.

Since its humble beginning, Oorah developed into a multifaceted nonprofit organization offering social, educational, and religious services to thousands of families throughout the world.

Oorah’s dozens of programs have broadened Rabbi Chaim Mintz’s impact, continuing each year to carry out his vision with care and dedication.

Bringing joy and Simcha to everyone.