Episode 35: Behind The Scenes With Michoel Pruzansky

Episode 35: Behind The Scenes With Michoel Pruzansky

Episode 35 is a very special episode!

We finally got Michoel ” Pruz” Pruzansky on the show!

For those who don’t know, Michoel Pruzansky’s song Bou Nirkod is our theme song for this show!

Since the inception of the show, Zeesha has been trying to get Michoel Pruzansky on with us! 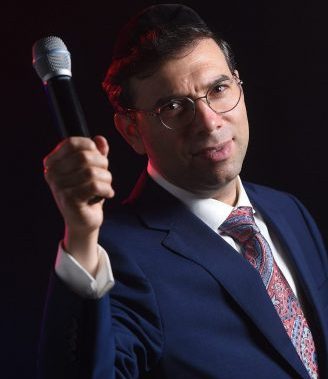 It really should come as no surprise that Michoel Pruzansky has been one of the hottest names in the Jewish music world for more than a decade. It’s not just that he has been blessed with incredible musical talent; what makes Michoel Pruzansky unique is his exceptional ability to find songs that showcase his incredible charisma and his infectious Simchas hachaim which are evident in every note and every performance.

The first hint that Michoel was destined to be one of the few who would find success in the competitive world of Jewish music came years ago, when he was a star soloist in Yerachmiel Begun’s Miami Boys Choir.

As an adult Michoel Pruzansky continued dazzling listeners and by 2003 he had already released his debut album Ashrecha together with the legendary Yochi Briskman.

Over the next few years, Michoel continued delighting audiences with heartfelt vocals at weddings and at concerts all over the world, sharing the stage with musical greats Avraham Fried, Mordechai Ben David, and Yaakov Shwekey.

But if Ashrecha was the world’s introduction to Michoel, affectionately known to his fans as Pruz, his next album, released in 2007, gave the Jewish music loving public something to really get excited about. The self-titled lead track of Pruzbul was more than just a clever way of getting Michael’s name out there, it was an incredible song, whose energetic sound, pumping rhythm and off the beaten tracks, lyrics made it an instant hit. Add in crowd-pleasers like the leibidic Taseh and the deeply riveting You’re Watching Me and there was no doubt that Michoel had firmly cemented his place in the highest echelons of Jewish music’s elite.

Hundreds of weddings and concerts later, Michael’s star continued to rise and he has often been touted as one of the rare performers in the Jewish music world who sounds as good live as he does in the studio.

Put him up on the bandstand and the mood in the room becomes electric – at weddings, the dance floor is suddenly filled with happy revelers, while concert attendees can be seen clapping in time to the music and even dancing in the aisles. That is Michoel’s magic, his ability to touch everyone in the room, no matter what the occasion.

Michoel followed up Pruz with MP3, another well-received album that became an instant classic.

Once again, Michoel’s ability to tap into the right composers was the key to the album’s success, packing MP3 with songs that were easy to sing but also showcased his own talent and versatility, with Letav Avid, Al Yisroel Shalom and Show Me the Way added to the list of Michoel’s musical gems.

The 2014 release of Pruz Control, was proof positive that Michoel was one of those rare singers who had staying power, wowing listeners with hits including Am Echad, Ashrei Mi, and Chaverim.

Fast forward to the fall of 2017 and Michoel is still aiming high, this time with an all-new album titled Shootin’ For The Moon. Far from slowing down and resting on his laurels, Michoel continues to give his all, imbuing every song with panache and proving once again that his meteoric rise to fame is no accident but clearly the result of hard work, G-d given talent and a genuine love for Jewish music lovers all over the world.

Founded over 25 years ago and based in Brooklyn New York KSCVK helps widows, orphans, and people who are in dire need of marrying off a child.

Working with their network of vendors, KSCVK ensures that every wedding is special.

Run by world-renowned party planner Devorah Benjamin, KSCVK takes care that each wedding is as elegant as the next ensuring dignity.

Since its humble beginning, Oorah developed into a multifaceted nonprofit organization offering social, educational, and religious services to thousands of families throughout the world.

Oorah’s dozens of programs have broadened Rabbi Chaim Mintz’s impact, continuing each year to carry out his vision with care and dedication.

Bringing joy and Simcha to everyone.